When Mateusz Rambacher got so seriously ill that he only had a 1% chance at survival, the doctors turned to Extracorporeal Membrane Oxygenation (ECMO) as a last resort. Today, one year later, Mateusz is making big plans to run a half-marathon and dance at his own wedding. 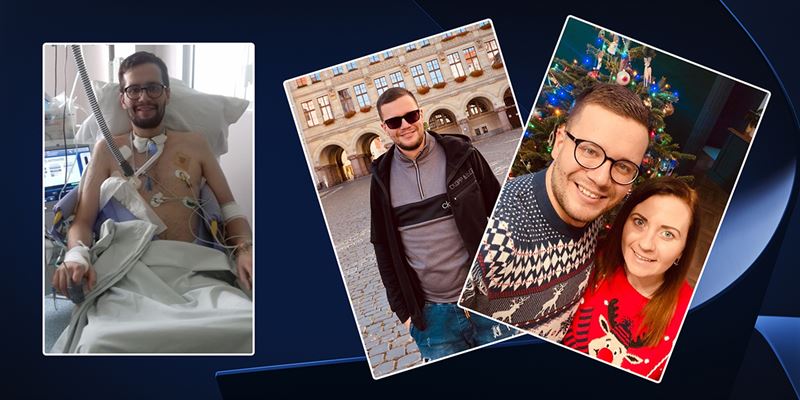 During last year, the words carpe diem got a whole new meaning to Mateusz Rambacher. After testing negative for COVID-19 twice, but still getting worse and worse, he had to seek acute care in late 2020.

“I was suffering from high fever, couldn’t stop vomiting and had huge problems breathing. In a few days I even started to lose consciousness. Well at the hospital, it turned out I did have the dreaded virus after all,” Mateusz explains.

He remembers little from the following weeks, being so seriously ill that the doctors only estimated there was 1% chance they would be able to save his life. With no other options left, they turned their hopes to Extracorporeal Membrane Oxygenation (ECMO), an approach that provides the body with oxygen when the lungs fail to perform this task.

“While my body was fighting for its life, the ECMO machine was supporting my lungs. I am so grateful to the medical team and the people at Getinge who build this device. Without it, I wouldn’t be alive.”

The first thing Mateusz remembers from waking up is a nice nurse with a colorful cap. He realized a few things quickly; that he didn’t know where he was, what had happened or even who he was.

“Gradually, I realized that a month and a half had passed and that I had slept through the entire holidays. I was sad, angry, confused and still happy. The mood swings were associated with many different moments and feelings, it’s hard to describe.”

Mateusz had to stay on ventilation for almost three months, and part of the time he was in coma. The long road to recovery was still in front of him.

“There were periods of being awake, but not being able to talk, which was terrible. After being in a coma there were also complications with my movements, damage to the fibular nerve caused a so called ‘foot drop’ effect. The rehab sessions were extremely painful and I am still not fully recovered in that sense. Although my lungs got better, they are not back to full speed yet.”

Looking at the possibility to survive – which was estimated to 1% – Mateusz is extremely grateful for being alive today. When he was discharged from the hospital in May 2021, his family gathered the closest friends and relatives and made sure Mateusz got to have his Christmas celebrations after all.

“Coming back to life like this has of course changed my view on many things. Today, I enjoy life as much as I can every single day, being grateful for every breath I get to take. Everyone and everything involved in saving me deserves a huge amount of appreciation, respect and gratitude.”

Looking ahead, Mateusz gives his lungs and legs no other option than to keep on performing better and better.

“Despite all odds I am going to run a half-marathon later this year. And even more importantly, I have decided to dance a lot at my own wedding,” he says and smiles.

This text is intended for an audience outside of the US.