Did you know that Getinge’s 90-year heritage of providing world-class sterilizer equipment began with a restructuring from horseshoe calks and wind engines to steam cookers for commercial kitchens? This is the story of how the company that started out in 1904 as an agricultural manufacturer in the Swedish village of Getinge, became a global leader in the field of infection control. 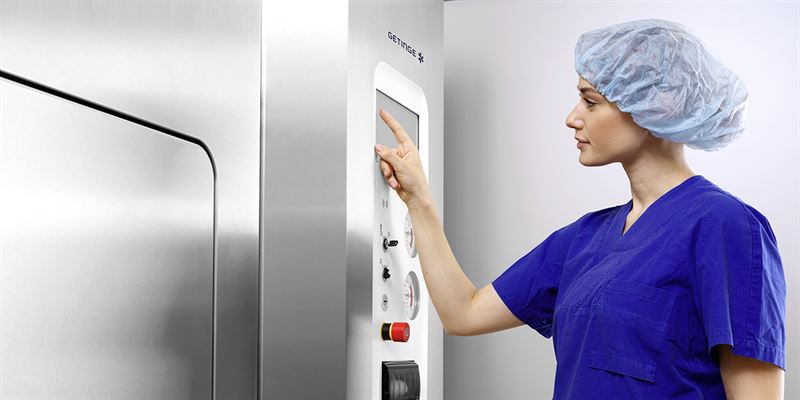 “Getinge started focusing on steam cookers already in the 1920s. Similarities between the products paved the way for adding sterilizers for medical equipment to the product range. The first steam sterilizer was produced in 1932,” says Harald Castler, who joined Getinge in 1988 and held various key positions in the infection control area before working as President Life Science until his retirement this year.

Sterilizers at that time had cylindrical chambers with hinged doors and relied on a simple gravity system to replace air with steam inside the chamber, and so did the early Getinge sterilizers.

Gert Linder, who started as a service technician in Switzerland, later became head of Getinge’s previous manufacturing unit for small sterilizers in Skärhamn, Sweden. He found one of these first sterilizers from the 1930s while doing a service call to a clinic in the city of Vevey in 1972.

“It was still fully operational, but the technology was outdated,” Gert remembers. “At that time, Getinge had moved on to pioneer the technology development in the industry by refining the sterilization process. The air removal is the key and by then we had started to use vacuum systems. A breakthrough that gave the world the modern sterilizer.”

He continues: “The vacuum solution enables air to be obliterated from even the hardest to reach places on the instruments. In 1965, we were also first in the world to install vacuum air removal systems on tabletop sterilizers.”

Striving to improve capacity and throughput, Getinge was also a frontrunner in designing square chambers and using sliding doors.

“Rigid steam channels were used as ‘jackets’ around the square chamber to keep its shape intact and make it as pressure resistant as a round chamber. The sliding doors were safer and more space efficient than the hinged ones,” Gert explains.

Getinge was acquired by Electrolux in 1965. Being part of a giant appliance maker, with a vast international network, enabled the company to expand by buying local sterilizer manufacturers.  It also helped pave the way for the transformation from decentralized to centralized handling of sterilization in hospitals.

“Traditionally, a large number of small sterilizers were located in departments all over the hospital. We were very proactive in the development of the Central Sterile Supply Department (CSSD) that is the heart of the sterile flow within the entire hospital,” Harald says.

Today, there is centralization in the hospitals, but in markets such as dental and medical practices, the small sterilizers are still used.

The strategy to focus on large, centralized installations led to the closing of the production plant in Skärhamn in 2014.

“The largest sterilizer we produced before the factory closed had a 100-liter capacity. This model is still present in Getinge’s portfolio of steam sterilizers today,” Gert says.

The focus on sterile reprocessing has been a main driver for continuous development. By extending the offer with additional solutions, such as washer-disinfectors, loading equipment, trolleys and software, Getinge moved on to become the outstanding supplier of complete solutions for Central Sterile Supply Departments (CSSD) we are today.

Harald Castler concludes: “This holistic approach made us a global market leader within infection control. Our way of thinking has become a benchmark for how to organize the entire flow of sterile goods within a hospital.”

This article is part of a series of stories highlighting Getinge’s 90-year-old history of building sterilizers. This text is intended to provide information to an international audience outside of the US.