A nationwide trial has kicked off in the Netherlands as four Mobile Medical Teams join forces to offer extracorporeal cardiopulmonary resuscitation (ECPR) as rescue therapy for refractory out-of-hospital cardiac arrest. Equipped with Getinge’s mobile heart-lung machine Cardiohelp in cars and helicopters, the teams can now use extracorporeal membrane oxygenation (ECMO) with the aim to save up to 200 more lives a year. 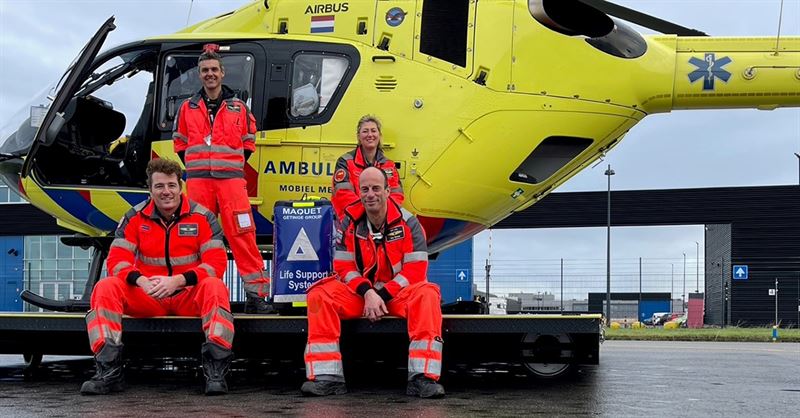 There are four Mobile Medical Teams (MMT) in the Netherlands, based in the cities of Amsterdam, Rotterdam, Nijmegen and Groningen. All of them have a Helicopter Emergency Medical Services (HEMS) team consisting of highly skilled pilots, nurses and physicians operating from helicopters and cars. Together, they cover the entire area of the Netherlands.

With a first of its kind nationwide trial starting up, the HEMS teams are getting even more busy saving lives. Since January, Rotterdam’s helicopter and MMT car are first out to be equipped with Cardiohelp – Getinge’s mobile heart-lung machine.

“With Cardiohelp onboard, we offer people at age 18 to 50, who suffer from out-of-hospital cardiac arrest, a much greater chance at survival. Without this possibility, these patients literally wouldn’t survive,” says Dinis Dos Reis Miranda, Anesthesiologist-Intensivist and HEMS physician at the Erasmus University Medical Center in Rotterdam.

After arriving to the patient, the trial allows the HEMS team to place a veno-arterial (VA) ECMO on patients who haven’t responded to cardiopulmonary resuscitation (CPR) within 20 minutes. By using Cardiohelp, they bypass the function of the patient’s heart and lungs.

“Two catheters or cannulas are inserted at the initiation of VA ECMO with their drainage and reinfusion ports located in central vessels and arteries. Deoxygenated blood is drained from the body just before where the heart is by an external pump, it passes through the membrane oxygenator and is then reinfused back into the patient directly after the heart,” explains Dinis. “The cause of the problem remains and you still need to take the critically ill patient to the hospital quickly, but in the meantime ECMO provides bloodflow and oxygenation.”

The study, financed by the Dutch Healthcare Authority, will go on for two years if it progresses well. It will be constantly and carefully evaluated before the remaining HEMS teams get their ECMO equipment onboard. In the study, there are two potential major benefits defined when it comes to providing HEMS teams with ECMO for prehospital care, which has to be proven in daily practice.

“The first is reducing low-flow time, meaning time under CPR, from approximately 70 to 35 minutes. The second one is to make ECPR available for the entire country, avoiding geographical differences in resuscitation care. We aim at saving around 200 more lives a year and I believe there is a big chance we will make it,” says Dinis.

This information is intended for an audience outside of the US.