Select Your Country or Region
Continue

50 years of Servo Ventilators – meet one of the pioneers

The birth of the Servo Ventilator just over 50 years ago is a prominent example of how human curiosity and stubbornness can pave the way for life-saving innovations. Meet Professor Emeritus Björn Jonson, one of the pioneers who developed the world’s first flow-controlled ventilator in Sweden in the late 1960s. 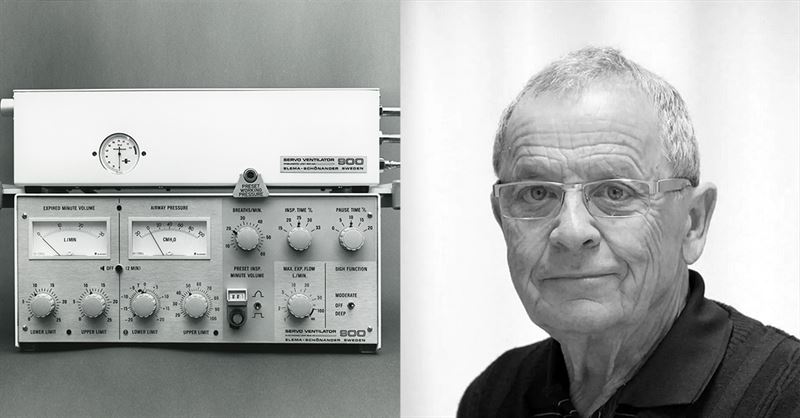 “The Servo ventilator became a reality because I was crossing roads with visionary mentors, a genius bedside-clinician and a strong industrial partner with world-class engineers. For me, what happened is still somewhat unreal,” Björn says.

In the early 1960s, noisy and bulky ventilators were state-of-the-art in delivering tidal volume and respiratory rate to patients. However, these devices lacked precision and were difficult to operate. For the patient they were noisy and uncomfortable.

In 1964, the young and ambitious clinical physiologist Björn Jonson came back to Sweden from a short exchange in the United States. One of his mentors, Associate Professor Sven Ingelstedt, claimed: “Ventilators are pressure or volume controlled. They should be flow controlled! However, it is not possible to control flow.”

Björn asked him. “If I learn to control flow, can we build a ventilator?” He instantly replied: “Sure”.

Björn started to learn new skills, such as lathing and glass processing. Machining equipment were acquired and brought into a janitor`s closet at the university where he was working.

“The cleaning lady sighed, but since we had no workshop premises at the time, she was kind enough to turn a blind eye,” Björn remembers.

Breakthrough with a glass syringe and the first patents

The makeshift workshop was used to build a plexiglass construction for housing the flow regulator that was the first groundbreaking step in the innovation process.

“The early efforts stumbled on friction or leakage between moving parts. Frustrated, I screwed on an injection syringe of glass. The piston rotated in the barrel seemingly without friction and there was absolutely no leakage,” Björn explains.

The project continued with a great degree of experimental freedom in an environment that encouraged cross-institutional teamwork. An ambitious electrical engineer, Sven-Gunnar Olsson was engaged in the project. In 1967, Björn applied for patents for a flow regulator and a flow-controlled ventilator.

“On the day after filing the application, Sven-Gunnar and I demonstrated our ventilator for the leaders of our industrial partner. Within a week, a contract was signed for its further development. Dr. Lars Nordström, a brilliant anesthesiologist in Lund, was engaged in this work. So was an outstanding team of engineers in Solna.  Two years later, we had a ventilator with nearly all the functions of the upcoming industrial product,” Björn remembers.

In 1968, Björn and Sven-Gunnar realized that a full electronic control of flow was needed. Again, leading experts said that this would not be possible. Adequate flow sensors and controllers did not exist. “Still, we did it,” Björn says.

The ‘brain’ of the ventilator was based on state-of-the-art electronics, in those days of the analogue kind. In the unique Servo Control System, the flow signal was analyzed and fed back to the electronic valves one hundred times per breath. This allowed great flexibility in operation and ventilation modes.

The ‘muscles’ consisted of just four moving parts and a simple system led gases to and from the patient. Without any need of tools, it took a minute to disassemble or assemble the system, which could easily be cleaned and disinfected.

“From June 1970, five Servo Ventilators were tested. I used one of them in a few critical cases. One was a baby delivered without heart activity. In a dramatic revival, the little girl became the first baby treated with a Servo Ventilator,” Björn recalls.

The small, easy-to-use ventilator enabled ventilation to be adjusted with unrivalled precision and flexibility. The silence of the ventilator and patient triggered breaths were important steps for increased patient comfort.

“The Servo Ventilator 900 strongly contributed to the development of Intensive Care. Physiological monitoring and diagnostics, which are cornerstones of the discipline, was made possible for the first time with our ventilator. Its flow and pressure meters were soon complemented by a capnograph and the evolution of volumetric capnography,” Björn explains.

The small, silent and efficient electronic ventilator, with the unique Servo control system for gas delivery, enabled the clinician to reliably achieve the targeted volumes and respiratory rates intended for the patient. For the first time, the ventilator cycle could be adjusted to provide the most efficient gas exchange, while alarm systems upheld patient safety.

The first commercial PEEP valve, which is used to maintain pressure in the lower airways at the end of the breathing cycle, offered a fundamental improvement in ventilation at respiratory distress syndrome in adults as well as in infants.

Read more about the development of Getinge’s Servo ventilators >>>